So first of all, we’re back! The blog fizzled out last autumn because life, but doesn’t that happen to everything? (Side note: still super impressed with the longevity of Buffalo Eats). Some quick updates: Megan and I are rooming together in an apartment right on Elmwood, and in the fall she’ll be returning to college (staying in Buffalo) while I (Matthew) go to D.C. for an internship semester. For now, though, we have a very specific goal in mind for the blog: to present an extremely candid, nuanced, and understanding view of what Buffalo is and can be for emerging and young adults. We’ll be including food, fashion, music – anything we can.

A few days ago, we had some free time during the day and decided to spend a few hours at the Albright Knox to see their Sweet Dreams, Baby! Life of Pop, London to Warhol exhibit. I’m no expert in Art History, but I left with a lasting positive impression; Kelly Richardson’s work with film and virtual reality was particularly striking.

On our way to the gallery, though, we stopped at the newly opened Firefly Cupcakes at Elmwood and Potomac – the old Zillycakes location. It happened to be National Donut Day (why does that exist) and, unable to obtain a Paula’s donut, we settled on trying out the new cupcake place. Just from walking by over the last few weeks, we were intrigued: the interior is very nicely redone and feels very Brooklyn (as disgusting as that analogy is). Once inside, we ordered a PBC (chocolate cupcake with peanut butter icing) and a Pink Lemonade (cupcake & frosting were lemon flavored, and then studded with marshmallows). Megan also ordered an Ambrosia tea.

The cupcake display looked great (as do the cupcakes themselves) and the drink menu is nice. Firefly serves Stumptown coffee and a good selection of loose leaf teas among other things. Megan’s tea was tasty: lightly pineapple flavored and only slightly sweet.

The cupcakes, though, were extremely disappointing. Cupcakes are one of those “very infrequent” things to eat (hopefully) – we’re talking once a month at the absolute most. So when we want to eat a cupcake, it better be fucking fantastic. 5/5 stars: no questions asked. Zillycakes always fulfilled this criteria, as you can tell from my old article here. Their cupcakes were inventive, never overly sweet, and perfectly portioned. But the complete opposite is true for Firefly: their flavors were exceedingly basic, cloyingly sweet, and huge. While our first bite was good, each subsequent bite became a chore. Each bite made us wish that the cupcake bar at Zillycakes still existed. 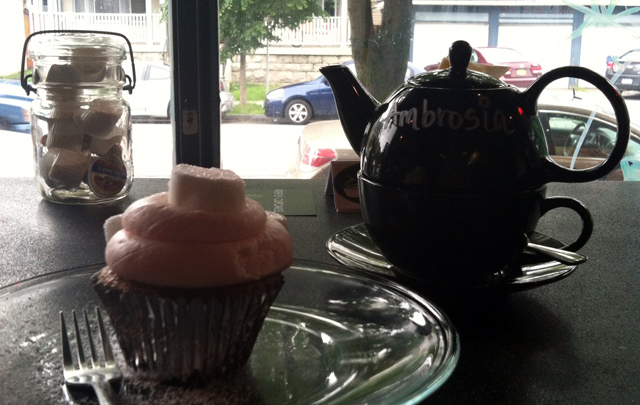 The worst thing about this is the fact that none of this is going to change. Firefly seems to be getting almost universal praise (or at the very least acceptance) around Buffalo. But it’s just not that good. At the most essential level, their cupcake recipe – the backbone of the entire store – is too dense, heavy, and sweet; the same goes for the frosting but to an even worse extent. This all becomes especially sad when realizing that Firefly is a replacement for Zillycakes; 3/5 stars seems particularly tragic when a 5/5 star place existed in the same location only weeks beforehand.

Unfortunately, we have no further plans to return; we know what we’re going to get, and it isn’t good. If you haven’t yet gone, feel free to try it out (maybe get drinks and split one cupcake), but don’t set your hopes too high.